GDB, please set a breakpoint on all my functions

For studying a piece of code, a colleague of mine wanted to set a breakpoint on all the functions of its applications. All but those in shared libraries, so not the libc, libpthread, etc. We agreed that this means all the functions defined in files compiled with -g.

I don't claim it's the best way to do, nor the most efficient tracing, I just highlight a possibility of gdb+python. Feel free to update the last step (or the others) to let it do what ever you need!

In the command line, GDB can list the functions with info functions:

I don't why there are two sets, but it's these files we are interested in ... so let's parse this output:

After a careful reading of the documentation, one finds out that only blocks contain a list of symbols, when you iterate over it. This is not written in bold, so easy to miss :-(. Anyway, we need to get the block corresponding to our source file scope. We could lookup it up from its PC: gdb.block_for_pc(pc), but at the moment we don't know a PC corresponding to this file.

One way to get this PC is by setting a breakpoint in this file: break <source file>:1 should work, and we'll be able to use the address of the breakpoint as a block lookup PC.

But again, there is no way to do this in Python :-( So let's parse again the CLI output!

Pay attention to error though, if GDB could not convert the location into an address it will through a gdb.error exception, or if set breakpoint pending is on (in my system for instance), it will not fail, but indicate that the breakpoint is pending. Setting multiple breakpoint at the same address may also change the output.

Now we've got the address on a file, we can get its global scope (Block.global_block) and list the symbols it contains. In this list, we just trim out what isn't a function:

And we're almost there, just need to assemble the different pieces:

Set a (trace) breakpoint on every functions

Last step, what do we want to do with this symbol: here, just some simple tracing each time the function is called:

which gives this last function:

We noticed that in multithreaded environments, if one thread calls a breakpointed function very often, the other won't have time to progress. Consider running in async mode to stop only the thread that hit the breakpoint:

GDB can call functions in the program's address-space. That can be useful in different sitations, for debugging or just informal code testing. Let's say I want to allocate some memory:

I can do what ever I want with this buffer:

... but that's not the point of this post. What I wanted to highlight here is want happens in a multithreaded execution, if I do something similar:

The problem here is that another thread hits the breakpoint during the execution of malloc. This is the default behavior of GDB, and it may be surprising when you're not used to it ...

But in addition to being suprising, it is problematic because the return value of malloc is lost! And the same can happend with next, step, finish, etc.

So if you want to force a single-thread behavior (that is, everytime you're sure that there should't be any deadlock during the function call), set GDB's scheduler-locking.

With the scheduler-locking enabled, GDB only let the current thread run. The execution of the other one is blocked in Linux scheduler.

(In practise, this is implemented in ptrace API, to which GDB either passes the process PID or only the thread TID.)

Don't forget to turn it back off again afterwards, or your thread will certainly block soon because of someone else's mutex!

In Python, I have a simple wrapper that does that for me:

I use it this way:

I recently improved my i3-wm configuration regarding the handling of workspaces. The idea is to have a quicker access to Firefox and Emacs, the main GUI tools I use for working. I initially added bindings to Urxvt terminal, but I happen to use it too much, so I cannot bind it to a particular workspace, they have to appear where ever I am :-)

Today my URxvt terminals are stuck. All of them, at the same time.

I know they're just clients (urxvtc) for the main daemon (urxvtd) so I'm not surprised that all of them are stuck, but I don't know why.

URxvt standalone version (urxvt) works well, so I can start inverstigating (by the way, in my i3 environment I mainly use URxvt client (bound to Mod+Shift+Enter), because it's faster to start, but I have a backup binding Mod+Ctrl+Enter for the standalone version, just in case things like that happen :).

Then, with the right tool, it's easy to find the problem:

So PID 20063 is the problem, urxvtd is waiting for it forever. But who is that?

Alright, it's my clipboard management script that doesn't return ...

Looking for a Developer/Researcher Position in April 2017

My contract with the University of Grenoble ends at the end of March 2017, so I'm looking for a developer/researcher position in Grenoble area, or remotely, in the field of debugging tools, but also runtime environments, compilers, verification & validation for HPC and embedded systems. 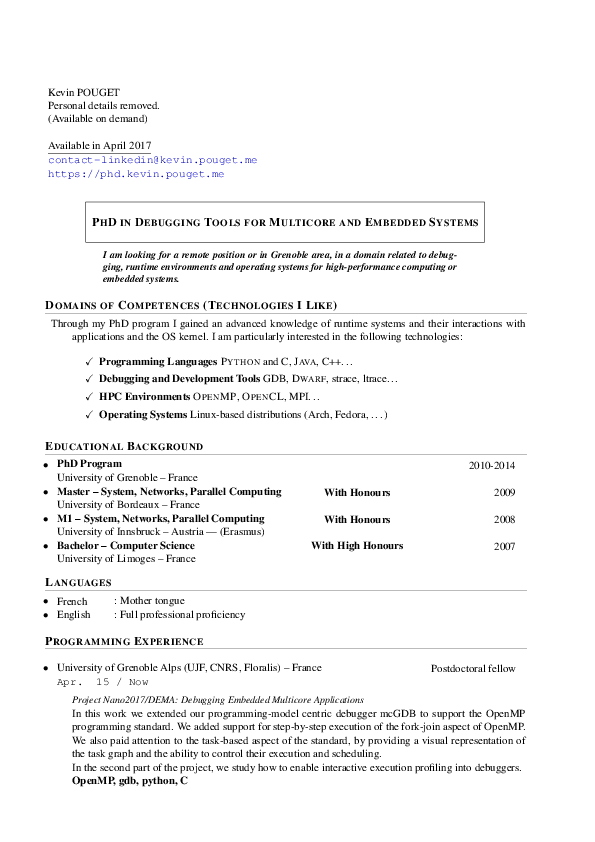 A printer-friendly version of my CV is also available. Non (or more) anonymized versions can also be generated on demand.

Break if outside of section

Just a little example of how to use gdb.py to create a breakpoint that only fires if called outside of a give section :

Functions start() and stop() delimit the section: it is okay to call do_in_section() inside the section. However, every once in a while, do_in_section() is called from outside of this section. (Forget about that boolean flag parameter, it's just for logging and consistency checks. Real-life codes won't have such an easy way to discriminate outside from inside call ... otherwise you don't need an advanced breakpoint!)

will lead to many useless stops, as most of the call to do_in_section() are legal, so what should do is:

which gives in Python:

Just source that file, or input it in GDB python commandline. The three last line instantiate the breakpoints:

For my current work on monitoring, I need to use Linux perf stat. Perf tools read and dislay the harware counters, either for the wall execution of a process, or while attaced to it:

That's great, I can attach perf to my process, run it for a while and stop it. But if I want to start, and stop, and start again, I can't. And that's what I want to do, from inside gdb.py.

Signals would be great for that, when ever I send a signal, perf dumps the counter values to stderr, and continues. But that's not implemented ...

So let's see in perf-stat source code what we can find for that.

these look like good candidates, but their symbols are not exported ...

Oh, great, and with no arguments, that's even easier ! Let's try it:

Exactly what we were looking for !

Triggering process_interval() with a signal

Next, we need to be able to trigger this function remotely, and without modifying perf-stat source code. (The easy option would be to patch perf-stat, but then our tool would be harder to distribute).

That can be done with the help of Linux LD_PRELOAD trick: we preload a bit of code inside perf-stat address space, and during the application initialization, we register the signal handler:

But how do we get the address of process_internal? that's where it is not really really clean: it get it from a lookup of the binary's symbol addresses:

and we inject it manually in the code:

A better way would be to pass it as an environment variable:

and in the shell:

and that works pretty well !

Note that SIGUSR1 does't work, certainly because it's used by perf-stat. And don't forget the -x, argument if you want to parse perf-stat output.

Also, keep in mind that this is not a robust implementation (of course :), as there might be concurrency problems, for instance if the signal is received while perf is updating the counters.

If it ain't broken don't fix it; I'll wait for problems before going any further!

Riddle with Python 2/3 and GDB.py checkpoint-restart

At the moment, I'm playing with thread checkpoint-restart, implemented somehow like setjmp/longjmp :

This a naive implementation, but with a few more tricks, it does work (what I have to do is save/restore rip and rbp for the frame above, I'm not sure why).

However this code works for Python 2, but not for Python 3. Can you find why?

I'll let you guess, the answer is written below in white:

This is a GPL 3.0 Python photowall generator, relying on ImageMagick. It is (and will remain) in "beta testing" version : I use it and it fits my requirements, but there is no guarantee that it won't crash in any different circunstances.

Python developers should be able to fix it and update it fairly easy, although the code is a bit old and could benefit from a face lifting (I wrote it in 2012).

An example of customization for Python developers: Polaroid captions are computed by function photowall.get_file_details. Just rewrite this function to decide what you want to use for caption. Current code (in the exception handler :$) takes the filename without extension and replaces underscores by new lines.

Polaroid mode with no caption

I built a graphical interface that should support all the command-line arguments. Use it with caution, I don't like writting GUIs ! 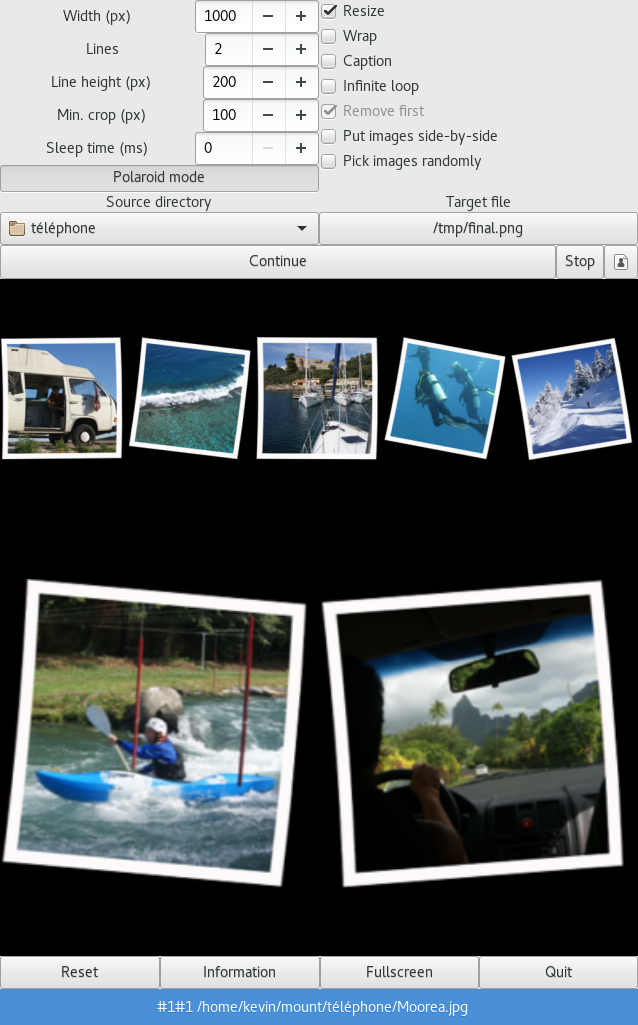 If you try to run pdb.set_trace() on a PyGTK application, the command-line prompt will be unusable, certainly because of (native) multithreading. Solution is simple once you got it, but not necessarily easy to find on the Internet: